After the "big two" - which is to say, "Top of the Pops" and "Hot Hits" - the "Chartbusters" series, on first Marble Arch and then Pye, were probably the most successful covers albums in circulation. Consequently, they too appear in several overseas countries, as outlined below.

Australian editions of the Marble Arch LPs are known from 1968 to 1970, courtesy of the Astor label. The covers are the same as in the UK, except that Astor have placed a gold logo (in the form of a sticker) in the top corners, obscuring the Marble Arch logo. We also have Astor pressings from the "Pye Chart Busters" series.

The discography below contains every confirmed release, although we lack several images. Further intervening releases which we do not have hard evidence of are currently omitted entirely...

Thanks to collector, Ken Grady for info and images. 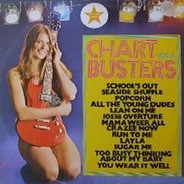 Brazilian releases initially came out on Pye, in conjunction with the local Continental label. There are both LPs and spin-off singles known. Later, there was a numbered EP series under the name "Hits Of England".

Israel started issuing the Marble Arch albums immediately, with this pressing of the 1965 'best-of' LP. It has a new cover but is otherwise much the same as the UK version. It was issued on Pye's Piccadilly label:
The main Chartbusters series began appearing in Israel no later than April 1970, leading to a run of at least 13 volumes, plus one more end-of-year collection ("Chartbusters 1972"). The labels were Israeli imprints of Marble Arch, and later Pye, which are visually distinct from the yellow UK labels, being printed on various red or orange papers. The covers carry Hebrew text on the fronts, and number the albums in sequence.

It is at once noticeable that Israel used the same cover photo on all of them - except "instant Chartbusters" - the album it was supposed to be on, which instead borrows the photo from the much earlier "Autumn Chartbusters"! Note how the repeating cover image is initially in full colour, but then changes to a variety of tints - presumably to maintain some variation from release to release.

Some of the covers carry album names, but these are not always accurate when compared to the UK albums, and come No. 8, they gave up and called each successive LP simply "Chartbusters".

There is evidence of a run of releases in South Africa, although we have few confirmed editions as yet. The South African editions straddle both the Marble Arch and the Pye eras, and we hope to add more data in due course.